The cast of The Hills: New Beginnings definitely “released their inhibitions” at their show’s LA premiere party last night. The stars of the MTV reboot celebrated in style with a red carpet, tons of friends, and of course, some amazing photos from their fun night out! Keep reading below for all the details!

Newcomer (to The Hills anyway!) Mischa Barton was the first to share a party photo from the night, which included fellow castmates Audrina Patridge, Justin Bobby Brescia, Frankie and Jennifer Delgado, along with Brody and Kaitlynn Carter Jenner. They were even joined by Natasha Bedingfield – who sang both the original and remixed version of the show’s theme “Unwritten!” You can see the photo for yourself below:

Other cast members like Jason Wahler and his wife Ashley, were also in attendance, posing on the carpet together. Ashley even posted a photo of the cast watching the series premiere at Les Deux (a famous Hills spot back in the day). Meanwhile, Whitney Port showed off her stunning outfit from the party, sharing her excitement for Monday’s official television premiere. She posed with Mischa, who also posed with Natasha at the party.

Ashley Wahler (Jason’s wife) who is a newbie to The Hills cast still feels the whole experience is surreal. She posted a photo from the red carpet to her official Instagram saying, “Still pinching myself about last night!!! I can’t believe all the work and months of shooting is finally here!“

Kaitlynn, who grew up watching her now husband Brody Jenner on The Hills is also part of the cast for the Hills: New Beginnings as well! Brody was joined by not only his wife but his mother, Linda Thompson as well for the premiere party at Le Deux.

Who remembers at the end of The Hills oh nearly 10 years ago, Heidi was begging Spencer to have a child and start a family together? He was completely against it. But now he shows up to The Hills: New Beginnings premiere with his adorable son, Gunner, in his arms. Looks like this guy has come full circle! His wife Heidi was right by his side sporting a long platinum blonde ponytail and gold metallic wrap dress. Now who said these two wouldn’t last!?

Were Kristin & Lauren at The Hills Premiere?

Visibly absent from The Hills premiere were the two stars of the original Hills. Kristin Cavallari and Lauren Conrad were nowhere in sight. Cavallari just recently finished hosting FOX’s reboot of the 2003 dating show Paradise Hotel and is currently filming her third season of ‘Very Cavallari’ for E!

Lauren Conrad is also super busy these days. She is married to her husband, William Tell, and the couple share a son together, Liam. Conrad also still has her clothing line in Kohls and runs The Little Market, fair trade goods from around the world. Just in the beginning of April, she announced that she and her husband are expecting a second child.

Scroll through the gallery below to see more cool photos! 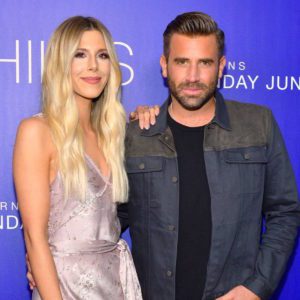 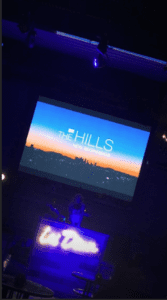 You can see Mischa, Audrina, Whitney, and the rest of The Hills: New Beginnings cast in action when the series premieres this Monday at 10/9 c on MTV!

MORE ON THE HILLS: NEW BEGINNINGS

The Hills: New Beginnings‘ Audrina Patridge and Mischa Barton Share a Night Out in Vegas

When Did Frankie Delgado Marry His Wife Jennifer Acosta? Get All the Details on The Hills: New Beginnings Couple Inside!

20 Fun Facts About Brody Jenner and Kaitlynn Carter from The Hills: New Beginnings